by Jordan Carr & the Boys 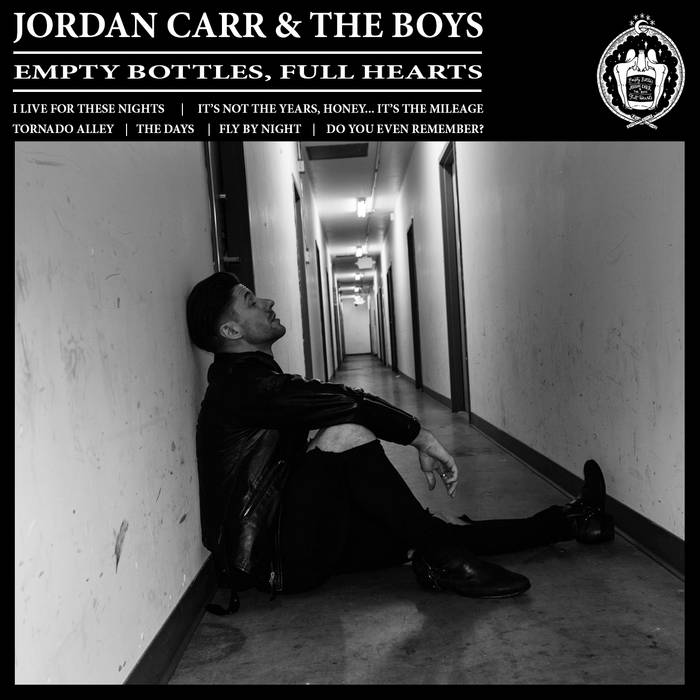 jack mesenbourg This album speaks to me often ...usually late at night ...but it tells stories that are so close to home Favorite track: Fly by Night.

Empty glasses. Broken hearts. Closing down bars. Watching the sun rise with the boys. Jordan Carr hasn’t just survived a lifetime’s worth of these nights. He lives for them.

And while some people might never accomplish anything past the empty bottles and piled-up voicemails, Carr channeled his adventures into Empty Bottles, Full Hearts, an album of whiskey-soaked folk rock that celebrates the virtues of an irresponsible life without ever glossing over the headaches and heartbreaks that are inevitably part of the deal.

The six tracks, engineered by Eric Bloomquist (Chance the Rapper, Sting, Soul Asylum), make up a record born for jukeboxes that still take quarters. However, the combination of Carr’s voice singing along with acoustic and electric guitars (and the occasional addition of horns that The Boss himself would approve of) make it modern enough for any rock’n’roll-loving listener whose life hasn’t gone according to plan. This is a story of a man that lost a lot of chances, money and—in the case of the jail sentence during which Carr wrote the entire album—freedom. It’s a stirring and gorgeous retelling of Carr’s reckless, rebellious years. He’ll be the first to admit that it’s all his fault.

Sonically, Empty Bottles, Full Hearts is a cheerier version of The Gaslight Anthem mixed with deep cuts from early Billy Joel albums. The record opens with “I Live For These Nights,” an E Street jam where Carr admits that a life after midnight is the only one he knows. “It’s Not The Years, Honey…It’s The Mileage” details the struggle of being unable to get away from a girl that was no good from him, even after he took an impulsive (and unpleasant) bus ride from Minneapolis to New York City just to get away. Carr returned home and spent the last of his money on a bottle to drink with friends on a weekend adventure. “I had an wild time and was certain I'd gotten over the girl only for the weekend to come to an end and the longing for the girl to return,” he says.

And so it goes for Carr. When a friend heard some of the singer/songwriter’s stories, he described Carr and his friends as “Tornado Alley,” unknowingly providing the title for a song about a summer where everyone seemed to be trying their damnedest not to grow up. “It was a really dark, coming-of-age period where everyone's future was so up in the air, but no one seemed like they were going anywhere,” Carr says. “It was a strange time unlike any other in my life that will never be duplicated … thankfully.” But even though he wouldn’t relive it, the chorus of “Tornado Alley” shows Carr looking back with a grin and a nod, prompting the listener to “raise a drink and toast to all that we know.”

“The Days” opens with Carr stoned, lost and remembering the time invested alternatively calling and hanging up on people that meant something, if only for a moment. “They weren’t my best days, they weren’t my worst days,” he sings. “They were just nights that I spent with you.”

Then comes “Fly By Night,” a song that opens with groove, trumpets and Carr’s own take on a 1989 Batman quote that’s comfortably wrapped in the kind of self-loathing the Dark Knight himself would likely approve of. “Have you ever danced with the devil in the pale moonlight out of hatred for yourself? Cause I know I have.” As the song plays on, Carr continues to use pop culture references to announce himself an imperfect anti-hero from movies and days gone by. He’s “a Bad Leroy Brown, the last Cool Hand Luke left in this town,” the kind of guy your mom dated before she settled down, the dude your dad still daydreams about being.

The record ends with “Do You Even Remember?” It’s Carr’s swan song featuring the addition of piano, saxophone and strings to create a stirring story that manages to be both present and nostalgic at the same time.

It takes a unique voice to look back at dark times and remember the insanity with both a knowing smile and the wisdom to never do it again. With a solid rock’n’roll trio and the occasional horn section behind him, Carr channels that voice on Empty Bottles, Full Hearts. He’s a kindred spirit of unhealthy coping mechanisms and he’s made a record for survivors, a soundtrack to wild nights, trampled feelings and hangovers that were totally worth it.

Despite the darkened nature of some of Carr's songs, hope shines through. Armed with a beat-up guitar and a cutting grin, Carr has traveled the globe and spread his tales of heartbreak, incarceration, empty bottles and full hearts.

Bandcamp Daily  your guide to the world of Bandcamp